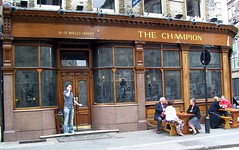 Tables set up in areas divided by shallow partitions, with banquette seating, surround the central bar area in this dark but atmospheric pub, which retains its remarkable stained-glass windows depicting various sporting champions of the era when it was built. The upstairs opens at 5:30pm and there are nice big corner tables with comfy chairs so very good for meeting people post-work and securing a big space.

This is a good pub for lunch during office hours, if the Sam Smith's menu appeals. Food is served noon-2:30pm and 6:30pm-8:30pm Monday to Thursday, and noon-2:30pm Friday and Saturday.

Bec comments in 2010: I go here often and it's never too crowded. I find a big bowl of chips is enough for two people. Though the lime & soda isn't as cheap as most Sam Smith's charge - usually it's an arbitrary 40p or something but once I was charged £2 - that was only once though.