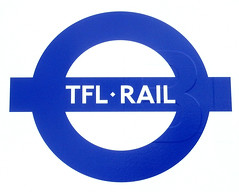 TfL Rail is the overall brand of two railway lines. One runs from Liverpool Street Station to Shenfield in Essex. The other runs from Paddington Station to Hayes & Harlington Station, where it splits, with a spur going to Heathrow Terminal 4 Station (replacing the previous Heathrow Connect service) and the main line going onwards to Reading. Work is ongoing to connect these two sections via Central London.

It was originally planned to be rebranded to Crossrail in May 2017, but this plan was later changed to having it become the Elizabeth Line in Autumn 2019 (previously planned as December 2018, but a delay to this was announced in August 2018). This was then delayed again. As of January 2020, the current plan is for it to open in Autumn 2021.

Stations in this category (view them on a map):