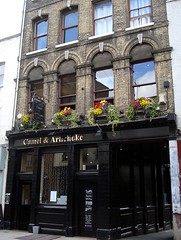 Previously known as the Elusive Camel, then as the Camel, and now as the Camel and Artichoke, this is a pub on Lower Marsh near Waterloo Station.

It's on two levels, with a bar and some seating on the ground floor, and enormous leather sofas and a Bookcrossing bookshelf upstairs. The sofas can be booked, as (I think) can the whole of the upstairs room. Both upstairs and downstairs have flatscreen TVs. According to the interweb, there's a patio beer garden.

Kake, Ewan, and ilmari visited on a Monday evening in July 2008. The only real ales available were Abbott Ale (£2.95/pint) and Greene King IPA (note however that an article in the April/May 2009 London Drinker magazine states that they now have Sambrook's Wandle on permanently).

The flatscreen downstairs was showing sport, but the one upstairs was switched off. Music was playing both upstairs and downstairs, just on the edge of being too loud - and, annoyingly, it was a CD on repeat; Kake heard the same song three times (Google suggests it may have been a Mark Ronson album).

Food is served noon-9:30pm Monday to Saturday, according to a blackboard seen outside in October 2009. It's standard pub food, with mains priced between £6.25 (mushroom stroganoff) and £7 (e.g. sausages and mash, beef or veg lasagne, chicken curry and rice), burgers at £7-7.50, filled jacket potatoes at £5, and baguettes/ciabatta with chips and salad at £5.50; see photo of the menu as of July 2008.