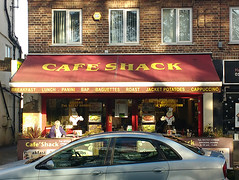 It's a fairly standard cafe of its type, though worth noting the part-covered outdoor seating area at the front.

Kake, bob, and others visited on a Saturday morning in January 2017. It was quite full when we arrived around 11am, but there were enough free tables to fit our party.

bob's set breakfast 2 with an extra egg and added chips and hash browns (£9.60 in total) photo was good overall, aside from the rather underwhelming chips. The fried eggs had suitably runny yolks, and the hash browns were crisp on the outside and soft in the middle. The sausage seemed to have been deep-fried, but this is not a criticism. Notably, unlike other places which make you choose coffee or tea, a soft drink (I chose a bottle of water) was included as an option for the set breakfast drink.

Kake's eggs benedict (£7.45) photo was a much larger dish than usual, being served on two large slices of white bloomer (with large, thick slices of ham to match). The bread and ham were reasonable quality, though, and the eggs had nicely runny yolks.

A child's meal of fishfingers, chips, and beans (£3.70) photo was also quite large; far more than our 4-year-old could eat. The accompanying milkshake (included in the price) was extremely sweet; Kake found one sip quite unpleasant and would be very reluctant to let said child order it again.

Service was friendly and efficient.

Accessibility: Small ramp to get in. Level access to the ladies' toilet, which doubles as an accessible one.