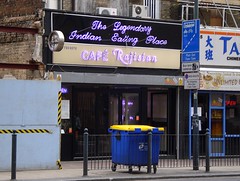 Kake, Bob, and doop tried out the delivery option in February 2008.

Vegetable jalfrezi was (according to doop, our veg jalfrezi expert) nothing special, and a bit greasy. doop also mentioned that he would have preferred the fresh green chillis to be sliced rather than whole, to let their flavour permeate the dish a bit more. Rajistan patiala (£2.75) was disappointing; described as "cubes of butter and soft aubergines simmered in spiced tomatoes and onion masala, topped with golden fried cashew nuts", it was actually an overly-sweet mush of dairy-based stodge with a few stray cubes of aubergine (according to Kake, that is; Bob liked it).