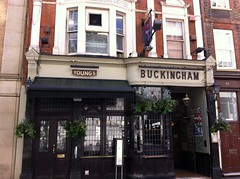 Young's pub in Westminster. One of only ten pubs to appear in all 35 editions of the Good Beer Guide (up to 2008). It has been refurbished in 2008, and so is a much nicer pub now - a good mix of traditional wood and glass with contemporary bits, like dark wooden stools and an attractively wallpapered ceiling at the back. The kitchen has also been improved so the menu contains less fried things. There seems to be a weekly specials menu.

The food was okay. The sausage feast (£10) consisted of six okay sausages, chips, bread (which wasn't great) and three pickles -- certainly enough to share as they suggest. It was about the right amount for bob. elvum had penne with bacon and chorizo in an arrabiata sauce, with garlic bread (£8, from a specials menu). This was certainly tasty, with very generous quantities of bacon and chorizo, although as Martin pointed out, it's the kind of food you could knock up yourself in twenty minutes. Overall, the food could probably be described as good, but not spectacular.