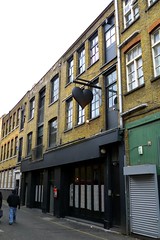 Pub and live music venue in Camden Town, in the Good Beer Guide.