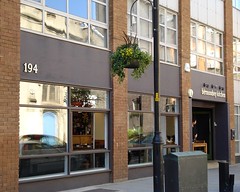 Now closed; was a bar and restaurant on Bermondsey Street in Bermondsey. The premises were bought by José Pizarro in mid-2011, and after a short period of trading under the previous name with the previous menu, the restaurant was relaunched as a Spanish restaurant called Pizarro.

The information below is retained for people who want to know what it was like as Bermondsey Kitchen.

They sell cocktails and a wide variety of wines. The cocktails are £5 before 7pm Monday to Saturday. They sell some beer but nothing very exciting. Before around 6:30pm they sell tapas rather than food.

secretlondon and some colleagues went here for a drink one Friday evening in March 2009. I had a Serendipity cocktail (£5) photo and a Spanish tortilla (£4) photo. Others had olives (£3) and bread & hoummus (£4).

We generally weren't impressed by the food but didn't try the main menu.