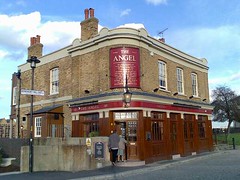 Food is served, and is reasonably good and reasonably priced; the Sunday roast in particular seems to be popular. Note that the only food available on Sundays (at least at lunchtime) is Sunday roast, and puddings. The usual menu has at least one vegetarian option but I'm unsure about the vegan options. Chips are available, at the very least, and you could probably get some baked beans with them too, since sausage/beans/chips is on the menu. I don't know if these are the one brand of beans (HP?) that aren't vegan though.

Nice lounge upstairs, with sofas and a very good view of the river down to Tower Bridge. The downstairs has old-fashioned style areas separated by wooden screens, but a single bar. There are some seats out on the balcony over the river. We've never seen this pub really crowded, though I don't think we've ever been in on a Friday or Saturday night.