Blog
Contact
About
(redirected from The Anchor And Hope, SE1 8LP) 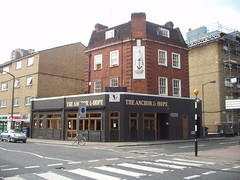 Renowned gastropub on the Cut in Borough, between Waterloo Station and Southwark Station.

This place has a blend of pub-style surroundings and a more formal dining room. The bar side has a blend of lower and higher tables, with some stool seating around the side and stools along the bar. You can't book ahead for the dining room, and you might get placed on a table with other people (so not good for romantic evening out!) but really super food. You can also eat at the bar. Possibly best to go in a group, as it's famous for its sharing dishes (for four or more). The menu also focuses heavily on meat dishes.

On [Marna]?'s lunchtime visit, it was fairly busy, but not so busy that they couldn't fit the six of us in straightaway. Ewan visited on a Tuesday evening in October 2008, and although there were still tables available around 6pm (despite rain outside), it soon became busier, and an hour later the bar side was completely packed.

Upon asking whether one could eat on the bar side, they offered to let Ewan eat his meal at the bar, given he was on his own. I went for the vegetarian option, which, on that day's menu photo, was the potato and stinking bishop pie (£11.40). It was listed as a wait of 20 minutes, but it came fairly promptly after ordering, though the restaurant wasn't quite so busy at that hour. The pie itself was a proper pie, fully encased in a wonderfully crispy shortcrust pastry, and as pungently flavoured as the cheese's name suggests. It was served with some dressed lettuce leaves. A heaped bowl of greens on the side was also brought out, though I hadn't ordered it (it wasn't charged, but would usually have been £3).

The experience was tasty enough that I followed up with a dessert. The barman recommended the flourless chocolate cake, but instead I selected a quince jelly with mascarpone and shortbread biscuit on the side, which was a lighter dessert and rather tasty as well.

On the bar are a number of draught lagers (Kirin Ichiban, Red Stripe, and the usual basics), as well as three handpulls with Bombardier, Young's ordinary and Hobgoblin. The wine list has a good variety of bottles, as well as three or four wines in each major category which are served in either 125ml measures (in tumblers, rather than stemmed wine glasses) or half-bottle carafes, all priced proportionate to the bottle price (so the Beaujolais was £2.85 for a glass, £8.70 for the 375ml carafe, or £17.40 for a bottle). House wine (£2/small glass) was perfectly drinkable as well. There's a cocktail list on the blackboard, all at very reasonable prices (around £4-£5).

Verdict: Ewan found the place to be almost unbearably busy on the pub side, though sitting at the bar was some protection from the crowd of drinkers. However, if you are able to get a table in the dining section, you'll find the food to be absolutely excellent, and it may even justify the wait.