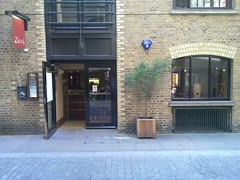 This was a branch of the Zizzi chain on Shad Thames near Tower Bridge. It closed down in 2015 and was replaced by a branch of Valentina deli, which later closed in turn.

Zizzi is a chain of Pizza Express style Italian restaurants. This is the branch on Shad Thames near Tower Bridge.

secretlondon and some colleagues came here one Friday night in July 2009 after a few beers locally. We had some garlic bread with cheese (which arrived with the pizza) (£4.55) and secretlondon had a diavola pizza (£8.75). secretlondon remembers thinking that they were stingy with the cheese. It was averagey, unexciting.

There was background music.