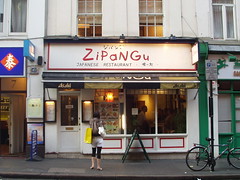 The information below is retained for people who want to know what it used to be like as Zipangu.

Nice little Japanese restaurant on the outskirts of Chinatown.

Good sushi, good service (I got takeaway from here once and they brought me a complimentary cup of green tea while I was waiting --Kake). It's fairly small, so you might want to book if you plan to bring a large group. The seating on the ground floor is very cosy, with small tables separated by screens. Seating for larger groups upstairs and (I think) in the basement.