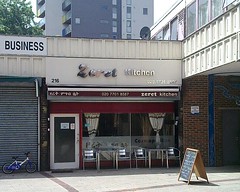 Ethiopian restaurant in Camberwell, secretlondon thinks on the site of an old greasy spoon. It is in a row of shops set back from Camberwell Road, and connected to the estate that contains the Castlemead tower block. It is in between Camberwell and Walworth, but south of Burgess Park, behind the former pub which is now a Nigerian mosque.

secretlondon popped in one Saturday evening in March 2010. Ethiopian and Eritrean food are really very similar, but Eritrean food seems to be more common, so it's nice to see Ethiopian food locally. Their menu, which is available on their website, is two pages with no starters or desserts. They are licensed — I had a bottle of water, but they also do Ethiopian tea (which I should have had) and wine, beer etc. I had one dish, awaze tibs (£7), which was spiced lamb on an injeera. I was asked how hot I wanted it. I was still hungry after one dish and next time I may have more.

secretlondon visited again in February 2018. It has expanded into the neighbouring cafe. I had their meat selection - half a portion of a lamb dish, half of a beef one, a veg dish and salad for £14.99. It came with a portion of azefa, a mustard and lentil salad. Extra injeera are £1.50. Their mixed vegan meal is £10.99 and their meal for two is £24.00. Awaze tibs is now £12.

It was quite dark with background music. There was a smell of incense.

secretlondon's verdict: The food was nice and I'll certainly come back. This feels like an unknown treasure, but I like Ethiopian and Eritrean food.