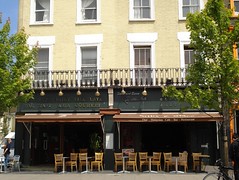 Yum Cha was a Chinese restaurant at the Chalk Farm end of Camden Town. According to Google Street View, it closed down by mid-2016.

Kake, Leon, and Richard visited for a dim sum lunch on a Thursday in June 2009. The place was almost empty when we arrived at 1pm, and it remained so throughout our visit, though the tables out the front on the pavement gradually became occupied over the hour we were there.

Soup dumplings ("Shanghai siew long bun") were very good, among the best Kake has had recently, with plenty of well-flavoured soup and wrappers that were sturdy enough to stay in one piece yet not overly thick.

Prawn cheung fun were also great; thin wrappers and large, fresh-tasting prawns with the springy, almost crunchy texture that's so easily lost by overcooking or incompetent storage. Top marks. Kake didn't enjoy the char siu cheung fun quite so much; the pork was a little too sweet.

Fried Shanghai pork dumplings included little bits of green veg; a nice change from the usual. Beef tripe with ginger and spring onion was good; large pieces of tripe in a flavourful sauce. Turnip paste was very well fried, with a nice tasty golden crust. Siu mai had a fairly solid texture; the Time Out review linked below suggests that this is due to a too-high meat-to-fat ratio, and Kake is inclined to agree. Egg tarts were OK, but would have been better had they arrived warm.

Our final bill photo was £10/head including both service and promotional discount.

Kake's verdict: I'll definitely be back. This is among the best dim sum I've had this year.

Accessibility: Two steps up to get in. There's an accessible toilet on the ground floor; other toilets are down a flight of stairs with a bend in the middle.