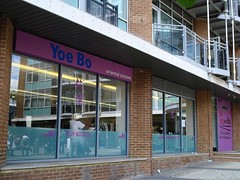 Yoe Bo was a Chinese all you can eat buffet restaurant in Stratford. It has now closed. As of March 2019 the premises are occupied by a different Chinese restaurant called Sichuan Grand photo.

A Chinese all you can eat buffet restaurant in Stratford near the theatre.

secretlondon went there with two others one Wednesday evening in March 2009. The only food on offer is the buffet which costs £12 a head (less for children and less at lunchtime, but £13 a head Friday and Saturday evenings). Chinese tea is £1.50 a head and tap water is 20p (and on the drinks list). They are licenced.

There is one large H-shaped buffet with some fruit in the middle. There wasn't much for vegetarians. They also had some desserts and other things on their own to the right. We didn't spot these until we were leaving.

The food was okay but it was still £12 a head for a Chinese buffet in outer London.