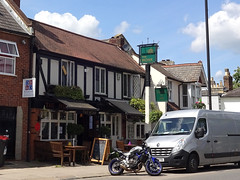 Pub in Barnet. It's been in and out of the Good Beer Guide a couple of times. It's also changed its name back and forth a few times; it was originally known as Ye Olde Monken Holt photo, renamed at some point to The Monk (pictured), and in September 2017 changed back to Ye Olde Monken Holt.

It's quite close to some nice countryside (it's only just on the A-Z), so handy for walkers. The decor is clean-looking, and the tables are nice and big (but not too big). There's some kind of beer garden out the back, and a few picnic tables out the front.

Kake visited on a Thursday afternoon in September 2007, arriving around 3pm. There were about half a dozen other customers, all men, bit of quiet conversation, but mostly people just sitting there with a pint and the paper. Staff were friendly enough, and nobody seemed to think I was weird for being a woman in a pub on my own. There was no music.

Pride was £2.60/pint, and they also had Courage Directors, Bombardier, and Greene King IPA.

As of May 2009, food is served noon-4pm and 6pm-9pm Monday-Sunday. The menu I saw in September 2007 was fairly short. Sandwiches ranged from £3.40 (ham and wholegrain mustard) via £4 (tuna, spring onion, and cheddar melt) to £5 (chicken club or ploughmans club). Mains were between £5 (ploughmans lunch) and £6.50 (gammon, egg, and chips), and jacket potatoes are £5. The sides/snacks/starters selection was on the "interesting" side of standard: chips (£1.80), hummous and pitta bread (£2.80), mixed salad (£3), nachos (£3.50), and sausages with sweet chilli dip (£3.75). I tried the chips, which were perfectly fine, and a generous portion. There were proper salt and pepper grinders on the tables, which is a good sign in terms of thought being put into the food.

bob visited early on a Saturday evening in September 2010. The pub was quite full. Beers available were Sharps Red Ale (£3), Greene King IPA and Ruddles.

Accessibility info: There is a disabled toilet.