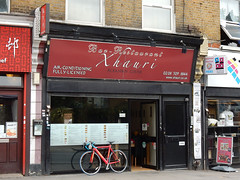 The decor is clean and restrained, with wood-effect laminate on both floor and tables. Walls are pale cream, punctuated with a rather dichotomised selection of art — traditional woodcuts of Albanian scenes sit alongside large modern prints of Tower Bridge and stock photos of wine glasses. Sprays of flower buds sit in glass vases in little alcoves along one wall.

There's seating for probably about 35-40 people at a combination of upright chairs and tables, and small pleather sofas facing each other across coffee tables. Out the back is a small courtyard garden with sofas and a couple more tables.

Kake and secretlondon visited on a Friday evening in July 2015. We hadn't booked, and indeed got the impression that advance booking might have seemed overly formal. There were about half a dozen other customers in when we arrived at 7pm, and the place was more than half-full by 9pm. Music (some of it quite folksy, some more poppy, presumably Albanian) was playing, not too loud, via a couple of flatscreens showing music videos.

Turshi (vinegar-pickled cabbage, gherkins, and red onions; £2) photo with speca me gjizë in the background was a generous portion, and certainly seemed to be home-made. The vegetables were nicely crisp and the vinegar flavour wasn't too harsh.

Speca me gjizë ("Xhauri special"; £2; see above for photo)was a dish of lightly-cooked green and red peppers in a rich, garlicky, yoghurty dressing; this was also rather tasty. The yoghurt was very rich, but worked well with our grilled meat dishes.

Qofte (minced meat kebabs; £1.50 per skewer) photo were OK but nothing special.

Rice with grilled lamb chops (£7) photo was a little disappointing. The rice had a rather "boil in the bag" consistency, and although it was advertised on the menu as being cooked with six different herbs (oregano, basil, rosemary, marjoram, thyme, and laurel), none of these were in evidence. However, the lamb chops themselves were fine; not overcooked, and a reasonably-sized portion.

House white wine was pretty decent tasting. It was more expensive on the bill than on the menu (£5 vs. £4 for what looked like about 175ml), but still good value. Tap water was provided swiftly on request, in decent-sized glasses with ice. No service charge was added to the bill.

Kake's verdict: It was OK. If I was in the area I might come back to try some of the soups, but I'd be unlikely to make a special journey.

Accessibility: Step-free to get in, and no internal steps to seating or toilet (a single, large, unisex cubicle). A small step to the garden out the back.