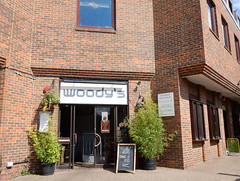 Pub in Kingston. Not to be confused with Woodies in nearby New Malden.

It's more of a bar/restaurant than a pub, really, but it's fine to come in just for a drink. Table service is available for drinks and food, but you can also order at the bar. It's right on the river, and has some outside seating along the river walk.

Inside, it's long and narrow, with entrances at each end and windows all along the long side looking out over the river. The tables and chairs are almost too mismatched for belief, ranging from a sturdy stripped-wood ten-seater farmhouse kitchen table to a plain round Formica-topped cafe table, and from studded-leather padded upright chairs to a pair of plastic stacking bucket seats. There's a low sofa, too.

Candles are on the tables, held variously in tall pewter candlesticks and old spirits bottles. The floorboards are scratched and worn, though the wallpaper and paintwork on the walls are in rather better condition. A set of wind chimes made from old cutlery hang at one end, above a pair of booths made from repurposed skateboard ramps with the skateboards themselves serving as seats photo.

Kake visited on a Wednesday afternoon in September 2015. When I arrived around 2pm most of the riverside seating was taken, but there were only three or four people inside. Music was playing, aimed at a rather younger demographic than most of the customers seemed to be (Outkast). Things changed significantly half an hour later, as the weather turned colder, most of the customers came inside, and the music became notably less lively.

There were two real ales on handpump: Wimbledon Tower (1.95/half, served in a half-to-line Budweiser glass) and Twickenham Sundancer. They also had keg taps, and a canned craft beer menu photo.

There's free WiFi with no password and no need to register.

Accessibility: No steps to get in. There's an accessible toilet on the level; other toilets are up two steps.