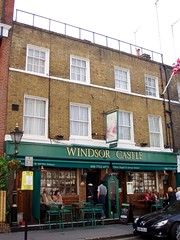 The Windsor Castle was a small pub in Marylebone, near Edgware Road Station. It closed for good in August 2016.

The interior is crammed with photos and memorabilia. A highly ornate cash register is placed in the entryway, several small glass cases holding model soldiers run along one wall, and the glass-fronted bar holds a collection of vintage beer bottles.

The walls and even the ceiling are covered with photos of footballers, members of the Royal Family, and men with seriously impressive moustaches — the last of these being members of the Handlebar Club, which meets here once a month. A large table in an alcove near the front window has a large brass plate in the middle commemorating the 50th anniversary of the Handlebar Club, and more brass plates around the edge recognising various regulars.

Kake, Ewan, and Bec visited on a Sunday afternoon in January 2014. There were four real ales on offer: Adnams Southwold, Bombardier, Wadworth 6X, and Greene King Abbot Ale. There were only a couple of other customers, so we had our pick of where to sit. Music was playing, not too loud, mostly from the '80s.

They do Thai food photo of menu as of January 2014, though we didn't try it. There's some outside seating for smokers at the front.

Accessibility: A couple of steps to get in. No further steps to the toilets.