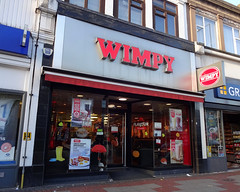 Branch of the retro hamburger chain in Morden, near the tube station. It does takeaway as well as eat-in.

secretlondon visited one Saturday in September 2016. Wimpy seems very retro and is branding itself as traditionally British burgers, whatever those are. The food is basic burgers, but they do a quorn burger as well. My cheeseburger (£5.10 including chips) was more substantial than you'd get from say, McDonald's. My large diet pepsi was £2.15 and an ice cream sundae was £2.50. The sundae was made from soft ice cream and was rather nice.

My order was taken at my table but you pay at the counter.

Accessibility: There were signs for an accessible toilet, but I couldn't see it, and I think it might be in with the baby changing area.