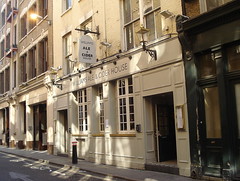 Metropolitan Pub Company (Greene King) pub tucked away down an alley on the City/Spitalfields borders, in the Good Beer Guide.

The ceiling is low, with exposed beams, and the lighting is kept dim. Exposed brick walls break up the space. There's banquette seating at the back, and booth-style seating in a side area. Shelves of books next to the banquette appear to be free to take — the sign simply reads "Take 'em, read 'em, donate 'em!"

Kake visited on a Monday afternoon in September 2014. There was one other customer during my visit (around 3pm-3:30pm). Music was playing, not too loud, and relatively interesting. Signs on the walls advertised organic fair trade coffee, loose leaf tea, and home-made iced tea.

All 14 handpumps were on, 3 of them with ciders (Westons Family Reserve, Westons Old Rosie, and Gwynt y Ddraig Scrumpy) and the remaining 11 with interesting real ales. The bar staff were happy to offer tasters, and service in general was friendly and welcoming. A half of Sambrook's Powerhouse Porter was £1.95.

According to a menu seen on this visit photo, food is served noon-4pm and 5pm-9pm Mon-Fri and 4pm-9pm Sat. It's based on traditional pub food, but on the more interesting side of things, and includes bar snacks (e.g. whitebait, sausage rolls, scotch eggs) as well as sandwiches and main meals.

A plate of whitebait (£4) arrived quickly and was pretty good — the fish were meaty, not very bony, and competently fried.

According to the 2015 Good Beer Guide, there are live jazz and blues performances on Friday and Saturday nights.

Kake's verdict: One of my favourites among this year's crop of new Good Beer Guide entries. I'd definitely come back if I was in the area.

Accessibility: A large step to get in. The ladies' is on the same level (but through two heavy doors) and one of the cubicles has a door that opens outwards. Gents' not checked.