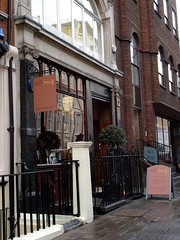 Wild Honey was a modern European restaurant in Mayfair; it has now closed.

Modern European restaurant in Mayfair focusing on the mid-price range and aiming for value-for-money. Received a Michelin star in 2008. It's the second opening by the people behind Arbutus, a similar restaurant with the same pricing philosophy, just a short distance to the east in Soho. Thus, set lunches are good value, and wines are available by the 250ml carafe as well as the bottle.

It's located in the old Drones club, which is a listed building. You can eat at the bar as well as at a table, which can be handy if you like lunching on your own. Tables are around the edge of the long, thin space, with tall banquette seating against the wall, and a variety of table sizes, broken up by discreet partitions. In the centre of the room are the cheeses, laid out in all their glory under a transparent lid.

Food is modern European, and very similar to that at Arbutus, with a similar set lunch and pre-theatre dinner menu (on which they are happy to substitute vegetarian options — the portions are just a little smaller than the a la carte) photo of menu in May 2009.

For Ewan's lunch in May 2009, the waiter took our orders and soon offered bread to start. They also happily brought out a carafe of tap water. I started with seasonal English asparagus with what was billed as soft poached egg and herb vinaigrette, though presented as rather more of a sauce-like base, with delicately herby leaves draped over it; in any case, the asparagus were immaculately cooked (£10) photo. My friend had the farinette of English snails, with garlic and pancetta, along with a lightly braised polenta-type accompaniment (£9.50) photo.

My main was a perfect risotto of market vegetables, with marjoram and Parmesan cheese grated on top (£14). In the centre was a dollop of a mousse-like avocado which slowly melted and suffused into the risotto, all most pleasing photo. My friend had line-caught cod accompanied by a razor clam filled with chick peas and chorizo, and a parsley sauce (£17) photo. This was well received, and she singled out the chick peas as excellent, having not previously considered these as something she might enjoy.

To finish, we went for a cheese selection to share and were given the option of having the waiter select them, or picking some out ourselves, which we ended up doing. Having selected them, they prepared our choices onto a plate with crackers and grapes (we were asked if we'd like some bread as well, which we declined). Cheeses were listed as £3.25 each, and portions were a good size photo.

For drinks we selected a carafe of red wine to start, and then followed with some white, which we asked the waiter to recommend as accompaniment for the fish. 250ml carafes are priced proportional to the bottle price, which certainly encourages trying different wines. The wine we chose were all excellent quality.

Kake, bob, and Ryan visited on a Monday evening in July 2008. On booking for 7pm, we were told that they'd want the table back at 9pm. We didn't feel too rushed overall, but we did note that our mains arrived almost immediately we'd finished our starters. The food was fine, and the cheeseboard was good. However, Kake didn't feel the atmosphere was entirely comfortable, possibly because our table was right next to the spot where the waitstaff hover in between tasks, and so perhaps wouldn't hurry back - though this sort of feeling is of course a very subjective thing, and I mention it merely as a single data point.