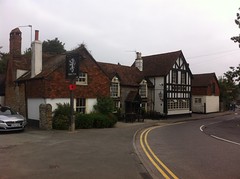 The front of the pub is obviously very old with low ceilings photo, while the back is possibly more modern.

bob visited on a Thursday lunchtime in September 2014. There were a few other customers in having lunch.

A pint of Harvey's Sussex Best (£3) was fine. They also had on Ringwood Best, Wadworth 6X, Brakspear Bitter, Sharp's Doom Bar, Old Speckled Hen, and a couple of others. Sharp's Atlantic was waiting to go on.

According to the Ember Inns website as of September 2014, food is served all day until 10pm. bob had the beer-battered whiting and chips (£4.50 from the daytime set menu) photo which was battered very nicely and tasted quite good.

According to the 2015 Good Beer Guide, CAMRA members receive a discount on cask ales.

Accessibility: Steps to get in the front and lots of steps internally at the front. Level access from the car park through the beer garden to the rear door. There is at least one disabled parking space. Level to back bar and a RADAR-locked accessible toilet. There is a step up to the gents.