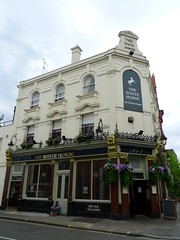 The pub has the nickname "the Sloaney Pony", on account of its proximity to Sloane Square and its reputation for being patronised heavily by Hooray Henries. It certainly can get busy at popular times, particularly on sunny weekends thanks to its extensive outdoor area with BBQ food and outdoor tables. This area is kept fenced off just away from the pub on a corner overlooking Parsons Green itself. The only time Kake has tried to visit, in the middle of summer, it was utterly overflowing with people, so she went to a little locals' pub around the corner instead. By around 3pm on Ewan's Saturday visit during a beer festival, the crush at the bar was several people deep, while on a blustery Saturday afternoon in October all the tables inside were taken (there were a few outside), though one did eventually become available.

Inside, seating wraps around both sides of the very large bar, with plenty of tables along the front, as well as couches and smaller tables to the rear. There's a separate dining room at the back with full table service, though food orders anywhere in the pub (or outside) are taken where you're seated (the bar will send someone over). Service is very friendly, though, and it is at least easy to get the staff's attention.

The pub focuses strongly on having a wide range of good beers. There is a constantly-changing selection of real ales and interesting imported beers, on eighteen handpulls (five on either side and ten at the front). On Ewan's visit, almost every handpull and draught tap had an imported American beer for their American Beer Festival (a regular occurrence around American Independence Day), though they had a few other discreet ones hidden down below bar level dispensing the regular lagers. On another visit by Ewan in October, the ales were Adnam's Broadside and Harvey's Sussex Best Bitter (£2.60/pint, apparently the regulars), Thornbridge Jaipur (£1.65/half), Thornbridge Jaywick, Thornbridge McConnel's Creamy Vanilla Stout, Gale's Seafarers Ale, and Cottage Brewing Golden Arrow. There was also a perry on handpull. The draught lagers included Sierra Nevada (as well as a special one-off Sierra Nevada Dark Rye, very tasty), Staropramen, Pilsner Urquell, Meantime Oktober Fest, Titan IPA (a 10% American beer, £3.50/half-pint), Poperings Hommel Bier, Duchesse de Bourgogne and several other Belgian and Dutch beers (including about three wheat beers). Staff were happy to allow us to taste any of the beers, and on suggesting we wanted to try a few, one particularly accommodating staff member disappeared a while before returning with four tasting glasses of various beers.

In addition to all the above, they also have a huge selection of bottled beers held in various refrigerators behind the bar on each side, with a particularly large number of American beers (including a Jewish one), as well as German, Belgian and various other nationalities' beers. The website has a list, which may or may not be up to date.

Food is excellent, but quite pricy, and every item on the menu is matched to a beer photo of menu in Oct 2009 and brunch menu. Mains are around £10-15, though there's a £32 steak on offer on a July 2009 visit. Food is served noon-10:30pm Monday to Friday, and 11am-10:30pm Saturday and Sunday. Ewan's mushroom and truffle herb salad with broad beens and a poached egg was lovely (£6.25) photo, and a side order of crispy new potatoes was a rather posh gastro twist on the usual chips -- small new potatoes sliced in half, fried with caperberries and olives dotted in amongst them photo, and a very decent snack for a favourable price (£2.75 for a good sized bowl). The cheese board selection on an October 2009 visit was also very reasonable for the price (£6.50) photo.