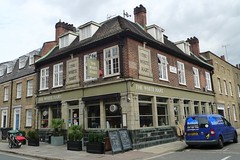 A pub convenient to both the South Bank and Waterloo Station, part of the Mitchells & Butlers Castle sub-chain.

The decor is characterised by mismatched chairs and tables, hardwood floors, big windows at the front for those who like the sunlight, and hideaway areas at the back for the light-averse. There is very little in the way of an outdoor area — the smoking area is a very thin stretch of pavement, and outside drinking is only allowed until 10pm. Patrons are asked not to drink on Whittlesey Street along the side of the pub.

Like other pubs in the chain, it has a fairly extensive range of German and Belgian lagers on tap; the choices in August 2007 were Erdinger Weisse, Franziskaner, Strawberry Fruli, Belle Vue Kriek, Maredsous Blonde, Schneider Weizen Hell, Budvar, Leffe, Hoegaarden, Staropramen, and the other usual suspects (though there was no evidence of Kriek on a later visit in June 2008). Real ales are also available; the selection in June 2008 was London Pride (£2.75/pint), Black Sheep, and Deuchars IPA, and they also had Aspall's cider on tap as well as Aspall Blush in bottles. In May 2013 there were three ciders on tap, including Aspall's, with more in bottles.

It suffers from the usual after-work crowding and can get busy at weekends as well, with some younger rowdier drinkers, but it's a very pleasant place indeed outside peak hours. When Kake visited on a Wednesday afternoon in June 2008, it was lovely and peaceful (though not echoingly deserted by any means) from lunchtime until 4:30pm, when they turned on the music (bordering on, but not quite reaching, "too loud") and the local office workers started to pile in. On a Tuesday afternoon visit in June 2013 it was again quiet, filling up during the afternoon (we left before rush hour). On a Friday afternoon visit in December 2016 it was full when we arrived around 2:30pm, and we had to wait some time for a table, though this was mainly due to there being multiple office Christmas lunch parties in. Noise levels were very high from all the conversation, made worse by the staff's decision to play music over the top of it.

As of May 2013, food is served noon-10pm Monday to Sunday photo of main menu, photo of sandwich menu; they also have bar snacks written up on a board behind the bar.

In June 2008, Kake's meatballs arrived so quickly that they were obviously microwaved; this wasn't really a problem, as it's a suitable enough reheating method for meatballs in tomato sauce, but the meatballs themselves were not particularly high quality. Decent-sized portion for the price, though. Halloumi skewers (£3.50) photo were somewhat better; freshly cooked, and done in a flavourful marinade, though they could have stood cooking for a little longer as the onion was on the cusp of being too raw.

In May 2013, "handmade fish fingers in a glazed bap with tartare" (£5.25) photo was about as far from a traditional fishfinger sandwich as it's possible to be, though the fish was well-cooked and the breadcrumbing crunchy. Bar snacks of baked brie, fried chorizo, and fried squid (£12 for three) photo were also good; the squid was lovely and tender, and the chorizo was good-quality and not over-fried.

Kake's verdict: Excellent in the daytime, but make sure you leave before office-chucking-out-time.

Child-friendliness: On our May 2013 visit, a member of staff told us children are welcome until 6pm.

Accessibility: The gents' is in the basement, but there's a combined ladies'/disabled loo on the ground floor, though (as of June 2008) they've tied up the lightswitch cord so you'd have great trouble reaching it from a wheelchair.