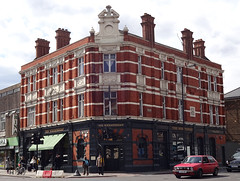 Large pub in Tooting, situated on the crossroads at Tooting Bec Station.

It's a pleasant enough space, with dark varnished floorboards, exposed brickwork, a high ceiling, and interesting tiling here and there. Padded banquettes run around the exterior walls, and mismatched tables and chairs are crammed into the rest of the room.

Kake and secretlondon visited on a Thursday evening in April 2016. There were four real ales on: Clarkshaws Endeavour (£4.50/pint, £2.50/half), Sambrook's Pumphouse, Windsor & Eton Knight Of The Garter, and Truman's Swift (Dark Star Original had just run out). We were offered tasters while deciding, and service was friendly (though perhaps a little overstretched, as they forgot to give us our change and had to be reminded after they'd moved on to the next customer).

There were quite a lot of people in when we arrived around 6pm, but still a few free seats. Music was playing, a little louder than ideal given the level of conversation.

According to their website as of April 2016, food is served lunchtimes and evenings (all day on weekends), including brunch on Saturday and roasts on Sundays. The menu is on the gastro side, with prices to match, and includes a warning that a 12.5% service charge will be added photo as of April 2016.

Also according to their website as of April 2016, quiz night is Sunday.

Child-friendliness: There were several children in when we visited, some of them wandering around the bar area. There are nappy change facilities in the accessible toilet.

Accessibility: A step to get in. Once you're in, it's step-free to the bar, seating area, and accessible toilet, but some of the tables are very close together.