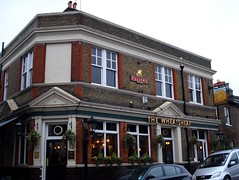 Inside, there are bare floorboards throughout, with woodpanelled walls in the front (bar) part and exposed brickwork in the back room. The front part is a fairly cosy L-shaped space wrapped around the bar; the back part is more open, and rather less cosy. The bar has two banks of handpumps, with three or four in each.

Kake and Billy visited on a Saturday afternoon in December 2008. Beers available were London Pride (£2.80), Chiswick, ESB, and the seasonal London Porter. They were showing football on both the retractable flatscreen situated between the front and back rooms (which points towards the bar) and another screen in the back room, so we retreated to the front leg of the "L", which is sheltered from these. There were perhaps a dozen other customers in, most of whom seemed to be there for the football.

John visited on a Friday evening in November 2012. There were several beers on tap, but no cider. They had bottles of Bulmers in the fridge (£4.40/pint), and apparently mulled Aspalls was available. Football was showing on the flatscreen TV, but the sound was off so this didn't interfere with conversation. There were quite a few people in, but there were still empty seats available all evening, and it only took a couple of minutes to get served at the bar.

As of December 2008, a menu advertised the food times as noon-3pm and 6pm-10pm Mon-Thu, noon-10pm Fri-Sat, and noon-8pm Sun (these are also the times given on their website as of September 2012). However, on the Saturday of our visit they weren't doing "proper food" until 1pm, though there was a more restricted brunch menu being served between 10am and 1pm. Brunch items were priced between £2.50-2.75 for sandwiches (bacon, sausage, or fried egg) and £9 for a full English breakfast. Kake tried the breakfast club sandwich (£6.75), a double-decker effort containing two slices of bacon, two sausages, mushrooms, a fried egg, and fresh tomatoes. It was really rather nice, and sensibly-assembled too. The sausage wasn't a cheap one, the egg was fried just right with a runny enough yolk to be tasty but not messy, and the fresh tomato worked well with the saltiness of the bacon.

Free wifi is available (via The Cloud — this worked fine for Kake in December 2008, and didn't ask for a password).

Accessibility: A couple of steps up to get in, and another step to get to the back area where the toilets are.