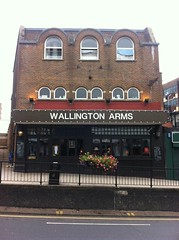 The Wallington Arms was an Antic pub in Wallington. It closed down for good in July 2019.

Antic pub in Wallington, in the Good Beer Guide.

It's split into three areas, with two normal drinking areas and the back room set out for dining. There's the typical Antic interior decoration of mismatched furniture and odd things on the walls.

bob visited on a Sunday afternooon in August 2015. I aimed for their opening time of noon, but had to wait as they didn't open on time.

There were four beers on cask: King Elixir #1 (£3.60/pint), King Working Class Hero (£3.60/pint), Volden Vim, and Truman's Lazarus. The bartender warned me that the Working Class Hero was unfined. They also had about 10 bottled beers, mostly brewed in London. I had the Kent Brewery/Gipsy Hill Yuzu (£4.60) photo and a Gipsy Hill Beatnik (£4.60) photo. There was a jug of water on the bar and the Sunday papers.

According to their website as of August 2015, food is served 5pm-10pm Mon-Thu, noon-10pm Fri-Sat, and noon-5pm Sun (though a different page on the website says food is only Tue-Sun, and on our Sunday visit they didn't start food until 2pm).

bob had the crispy baby squid with ink mayo (£5) photo which was cooked very well. The ink mayo was fine but nothing special. I also had a large portion of brined BBQ pork ribs (£9) photo, which were very tasty.

According to their website as of August 2015, quiz night is Wednesday from 8pm, dogs are allowed, and children are welcome until 9pm.

Accessibility: No step to get in. Level to the toilets, including a RADAR locked accessible toilet.