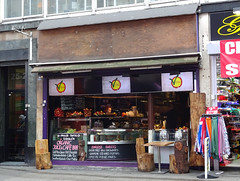 Vitao was a 100% vegan upmarket cafe/restaurant on Oxford Street. It has now closed, though as of late 2017 the owners run a weekday lunchtime market stall outside the American International Church on Tottenham Court Road, just around the corner.