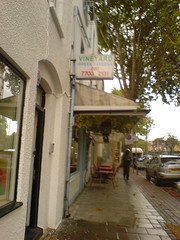 Greek restaurant on Camberwell Grove in Camberwell, near the junction with Camberwell Church Street. It has tables outside on the pavement. Inside there are plastic vines across the ceiling and more tables.

secretlondon visited one Sunday afternoon in April 2009. Greek instrumental music was playing in the background. I had the "special lunch menu" mini meze which included taramasalata, houmous, tzatziki, beetroot, tuna salad, potato salad, and chick peas with hot pitta bread, followed by chicken kebab, pork kebab, koeftethes, feta salad, and chips (£7). I also had a 1 litre bottle of sparkling water (£3) and a Greek coffee to finish (~£1.60). It was a lot of food and I couldn't finish it all. The dips were nice with strips of warm pitta and the koeftethes were interesting. The beetroot, potato and tuna salads were generally uninteresting.

They do larger meze — a three course one for £14 (minimum two people) and a fish one for £16. They are licensed but I didn't sample.

DrHyde visited one midweek evening in July 2009. The wine list is small but well-formed, with some decent non-retsina (and hence drinkable) Greek wines. Portions were generous. Starters, mains and a litre and a half of wine for four people came to under a hundred quid, which is good value. When he visited again in 2013 little had changed, including the prices: loads of scoff and wine for five people for a hundred and twenty quid.

Accessibility: One step up and one step down to enter. There is seating on the pavement but someone else would have to order. No additional steps to toilets, but very narrow doorways and no handrails.