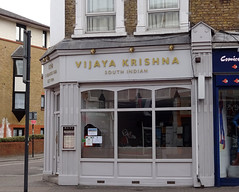 South Indian restaurant on Mitcham Road in Tooting. It also does takeaway and delivery, with online ordering via Just Eat.

secretlondon came with a group one weekday evening in September 2016. We hadn't booked, and probably should have done, as it's not very big and was pretty full. They managed to find us a table though.

At the back of the restaurant there are statues of two Indian gods — I presume Krishna and his consort. There was quiet Indian background music.

I had cashew nut pakoda (£3.90) which was a bit dry, followed by lamb green masala (£6.90) with plain rice (£2.40) and two puri (£2.30 for 2). They don't sell naans or other tandoor bread; all the bread we had was fried. The food was probably underspiced for my taste. The menu has chilli markings to show how hot the food is, and according to this mine was medium spiced; it probably was, but it was still a bit bland for me.

They are licensed and sell Cobra and Kingfisher beer, and probably wine but I don't remember.