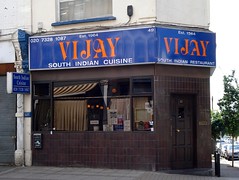 Restaurant in Kilburn, specialising in South Indian vegetarian food (though the menu does include meat and seafood too). It's in the 2007 Good Curry Guide, and does takeaway and delivery.

It seats maybe about 70 people at small square tables arranged in groups to seat 2, 4, 6, or more. Pale cream linen tablecloths are set with contemporary cutlery and paper napkins. Sponged paintwork and rattan screens on the walls contrast with a hard wearing institutional-style carpet on the floor. Tulip-shaped lamps hang from a wooden-beam false ceiling.

Kake visited on a Wednesday lunchtime in January 2015. There were no other customers in when I arrived around 12:30pm, and this remained the case throughout my visit. No music was playing.

They don't do thalis, so I ordered a dish of mathanga erissery (pumpkin with blackeye beans; £5.25) and some plain rice (£2.70) photo of both. The pumpkin was nice and soft, and the beans cooked just right. The heat level was medium to my palate, the spicing was balanced, and it wasn't too oily. Plain rice was a generous portion and generally good, aside from one hard lump perhaps caused by drying out on the side of the rice pot.

Service was fine if rather taciturn, and tap water arrived swiftly (though with an unrequested slice of lemon). A 10% service charge was added to my bill.

Accessibility: A step and two fairly-close-together doors to get in. Toilets are in the basement, down a straight flight of stairs with a sturdy handrail on both sides.