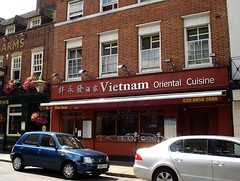 Vietnam Oriental Cuisine was a mainly-Chinese restaurant (despite the name) in Greenwich. According to Google Street View, it closed down by April 2016. As of October 2018 the premises are occupied by a Vietnamese restaurant called Pho Street.

Despite the name, this is a mainly-Chinese restaurant in Greenwich (though it does have a few Vietnamese dishes on the menu). They do dim sum.

Kake and friends visited on a Thursday lunchtime in July 2013. We'd booked in advance for a party including three children, and were sensibly seated at a large table in a corner, with plenty of space for pram and highchairs.

We ordered a mixture of steamed and fried dim sum, which in general were fine without being outstanding. Vegetarian dumplings (£2.90) photo were among the lowlights, with overly thick skins and undistinguished fillings. Siu mai (£2.90) photo were OK. Roast pork puffs (£2.80) photo had no obvious flaws aside from being served too cold.

Two of the dim sum dishes were notable in Kake's opinion. Steamed satay cuttlefish (£2.90) photo had a well-judged texture, and the flavour of the cuttlefish wasn't overwhelmed by the satay sauce. Black sesame paste dumplings in peanut crumbs (£2.60) photo were an intriguing combination of salty and sweet, and the semi-liquid filling worked well.

A side order of stirfried mangetout was well-executed; the mangetout were cooked through but still crisp, and seasoned just right. Plain rice was also well-executed, neither soggy nor dry, and sticking together just the right amount for eating with chopsticks.

Our final bill came to £16.50 per adult, which (considering that two of the children in our party also shared the food) is quite reasonable for a dim sum lunch in London at the moment.

Kake's verdict: I wouldn't say it's worth a journey, but if you're in Greenwich with young children and want somewhere to go for lunch, it'll do the job just fine.

Child-friendliness: No babychange facilities. They have at least two highchairs on the premises. The staff on our July 2013 lunchtime visit were very friendly and welcoming towards the children in our party (ranging from five months to four-and-three-quarters).

Accessibility: A small step to get in, and stepfree once you're in.