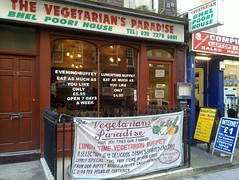 The Vegetarian's Paradise was a vegetarian bhel poori house on Marchmont Street near the Brunswick Centre in Bloomsbury. It has now closed. As of April 2016 the premises are completely boarded off photo.

Vegetarian bhel poori house on Marchmont Street near the Brunswick Centre in Bloomsbury. It's been there since at least 2003, probably longer.

Note: As of December 2015, Fat Gay Vegan reports that the windows of the Vegetarian's Paradise are papered over. However, it's not entirely clear whether this is a permanent closure or a temporary one for refurbishment.

This is a small shop-sized restaurant with a twice daily buffet, although it appears also to do non-buffet Indian food and has online ordering via Just Eat.

secretlondon and friend visited one weekday evening in November 2011. They had a buffet on for £6 a head. We also had chai for £1.20 a cup. The buffet had three types of rice and a variety of vegetarian curries. Compared to Indian Veg in Islington there was a wider range here, and it was much spicer. The food looked less interesting, though — one of the curries looked like it contained frozen mixed veg, and another clearly had pasta in. There were no paneer dishes when we were there. They had two types of daal — much thicker than the one at Indian Veg. They also had a dessert of flavoured gelatine cubes and rice pudding.

A menu I picked up said they also do a lunchtime buffet for £5, although the menu didn't mention the evening buffet.

The restaurant is a bit shabby and the tables were quite close together. It was also far too hot! Even with a short sleeved tshirt on I was overly hot. There was an Indian radio station on in the background. I think there was step free access, but toilets not checked and it was quite tight.