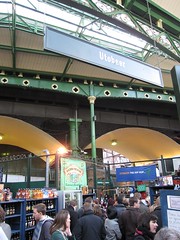 Utobeer is a small shop in Borough Market, selling bottled beer, and nothing but bottled beer. It opened in 1999.

The range is very extensive, focusing mostly on mainland European - particularly Belgian - beers but with brews from all over the rest of the world too. This is still one of the best places to get good American beer from microbreweries. There's not so much British beer, but what there is is generally from smaller, less well-known breweries.

A great little shop, which should be in everyone's address book.

The people behind this also run the nearby The Rake pub, at the edge of the Market, as well as Tap East in Stratford.