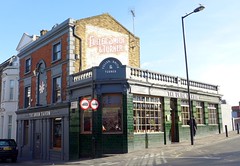 Fuller's pub in Maida Vale, near Westbourne Park Station. Previously named the Grand Union photo (and not to be confused with the unrelated Grand Union chain of burger bars), it has now been renamed the Union Tavern.

Situated on a corner site just above the Grand Union canal, the main part of this pub is a somewhat angular and broken-up space, with internal stairs leading from one small section to another. The ground floor has a stack of board games, a flatscreen (switched off on our visit), a sofa, and various other types of seating. A wrought-iron spiral staircase leads down from here to a "snug" and a fair bit of outside seating in a narrow space alongside the canal photo.

Kake and friends visited on a Thursday early evening in March 2012. It was a sunny day and we were lucky to snag a table in the canalside seating (if we hadn't arrived before post-work drinking time, we probably wouldn't have managed this).

There were two real ales on offer: Fuller's Front Row (£3.55) and London Pride. They also had Honeydew, Aspall's cider, and various lagers on tap, and things like Fruli and Rekorderlig cider in the fridge. (It's worth noting that according to the Pubs Galore comments linked below, the range of real ales has expanded since our visit.)

According to the Union Tavern website as of April 2013, food is served noon-4pm and 5pm-10pm Mon-Fri, noon-10pm Sat, and noon-9pm Sun. On our visit we arrived shortly before the kitchen opened at 5pm and asked for some crisps or nuts; we were told that they cook all their own crisps and nuts in-house, and that evening's batch wasn't ready yet. Once the kitchen opened, we ordered the spicy whitebait with bloody mary mayonnaise (£4.50) photo; these weren't bad, competently fried and with a nice bit of spiciness in the dip.

According to their website as of April 2013, there's a pub quiz every Wednesday.

Accessibility: At least one step to get in and to the bar, depending on which entrance you choose. Another step to the ladies'. Access to the "snug" and the beer garden is down a narrow, tightly-winding spiral staircase with a handrail.