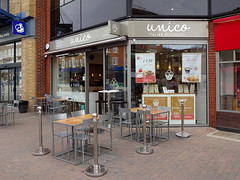 Gelato cafe in Bromley, just along the road from Bromley South Station.

It's a small space, but light and bright with white-painted walls, floor-to-ceiling windows on two sides, and a large mirror on one wall to make it feel more spacious. Chairs, tables, and floor are all (slightly different) light wood. Service counters hold pastries and gelato, and desserts sit waiting in a display fridge.

Kake visited on a Thursday morning in May 2019. There were two other customers when I arrived around 9am. Upbeat music was playing, not too loud.

The savoury options were limited to what they call "bubbles", which are small bread rolls with fillings baked into the centre. I had two of these, which was a reasonable quantity for a light breakfast: aubergine parmigiana and vegetable caponata (£2 each) photo after cutting in half. They were microwaved and served still in the packaging.

I also had a small cup of salted caramel gelato (£3) photo. I am no gelato expert (this was my first ice cream since February 2017, and that was a Mr Whippy) but I thought it was pretty good, and a generous portion too. The texture was smooth and creamy, there were no ice crystals, and the caramel flavour had just the right amount of intensity. It melted quite quickly even though it wasn't a particularly warm day, but according to the Picky Glutton (see link below) this is characteristic of Italian gelato, which is generally served at a higher temperature than other ice cream.

Earl Grey tea (£2) was made with a Shibui tea pyramid, and was fine.

Service was a little stiff — not exactly unfriendly, but a little standoffish, and they seemed quite surprised that I didn't already know what their savoury options were.

Vegan/vegetarian friendliness: About half of the gelato flavours are vegan, and they also have vegan croissants. They offer alternate milks such as oat, soya, and almond for hot drinks at no extra charge.

Accessibility: No steps to get in. About half of the interior seating is on tall stools, and the rest is on very small and uncomfortable chairs. The chairs out the front are a little less tiny and hence less uncomfortable. No customer toilet.