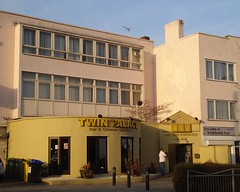 Kake, Ewan, bob, and Matthew visited on a Sunday evening in April 2009. There were only a few other customers in, leaving the large space looking quite empty photo. Despite this, cheery dance music of the '90s was playing over the sound system, perhaps to try to encourage people to go and dance between courses on the flashing disco floor at the front of the building.

We were originally offered the all-you-can-eat menu, which is freshly cooked to order and for a Sunday was £13.80 per person photo, but most of us weren't that hungry so we decided to go a la carte. This was perhaps a mistake, since the AYCE selection actually looked rather more interesting than the regular selection, particularly when it came to vegetable dishes.

The food was a little peculiar, overall. It avoided the usual problems of substandard Asian restaurants — stale oil, excessive grease, too low a temperature in the deep-frier — so it's hard to put a finger on what the underlying cause of our disappointment was. Perhaps they're simply catering for their audience, by providing large portions of unchallenging carbs at cheap prices?

We shared four starters between us. "Twin spicy vegetable in salt and chilli" (£3.80) photo was actually pretty good, and the highlight of the meal; the batter was crisp and not greasy, and the frying of the vegetables was well-judged, with the aubergine in particular having a lovely melting texture. Yasai gyoza (£3.80 for six) photo, on the other hand, were quite odd, with the wrappers reminiscent of shortcrust pastry and the nondescript vegetable filling having a flavour reminiscent of tinned beansprouts. Spring rolls (£2.90 for six) again tasted of tinned beansprouts, and the vegetable content was a mush. Crispy seaweed (£2.90) had far too much sugar.

Mains were no better. Ewan's fried noodles with mushrooms (£3.50) photo were unimpressive, while Kake's prawn lo mein (£4) photo, despite being in the "special" part of the menu, consisted of a mound of plain noodles in a slick of flavourless brown gravy topped with half a dozen perfectly good king prawns (I ate the prawns and left most of the rest).

In fact, everyone except bob left most of their main courses; this fact went unremarked on by our waitress, who had throughout the evening avoided remarking on anything at all, as well as making eye contact or responding to thanks. She also had trouble understanding what we were trying to order, and poured our wine (pinot grigio) into everyone's glasses rather than giving one of us the opportunity to taste it first. The only thing she did do right was offering to top up our teapot without us having to ask.

Other aspects of note include the chopsticks — the cheapest Kake has ever seen, full of splinters — and the water leaking through the roof of the ladies'. We don't think we'll be coming back.