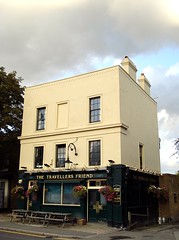 Note: According to the Oct/Nov 2017 London Drinker, the Traveller's Friend has had a substantial refurbishment since we last visited, and so some or all of the details below may be out of date.

It's quite small, with seating for about 20 people (if that), plus half a dozen bar stools, though there are picnic benches out the front too and a beer garden out the back.

Kake visited on a Tuesday evening in September 2008. When I arrived around 5:30pm there were already a couple of customers on the picnic benches, half a dozen regulars inside, and more people in the beer garden. Service was welcoming and friendly, as were the regulars (one of whom asked me about the book I was reading).

Three of the four handpumps on the front of the bar were in action (the Deuchars IPA clip on the fourth was turned around; I also spotted three or four other handpumps around the side but didn't see if they had clips). I had Broadside (£2.80/pint), which was fine.

Accessibility: one step up to get in, level access to the main part of the pub and the toilets, two steps down to the beer garden at the back.