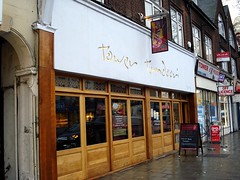 Decent enough Indian restaurant near the south end of Tower Bridge Road. It's definitely a cut above your average curryhouse. The prices are also slightly higher than average, though the portions are generous enough. (Warning if eating in: the interweb suggests that the beer is rather expensive.)

They offer takeaway and delivery as well, and you can order online via Just Eat.

Kake, bob, and doop tried the takeaway option in December 2007, paying £50 total for ample food for four people (us three plus one person's worth of leftovers). Chicken dansak (£6.50) was good, with large, tender pieces of chicken, lentils that had retained some shape instead of collapsing into mush, not too much sweetness in the sauce, and an average amount of chilli heat. Paneer-stuffed minced lamb patties (£4.25) were also good, as were the lamb samosas (£2.75).

On the other hand, lemon rice (£3.50) was quite average, and bob's keema naan (£2.75) was "nothing to write home about". A side dish of spinach with lentils (£3.50) was slightly disappointing; and in fact the vegetable dishes all sounded relatively uninspiring in comparison with the rest of the menu.

Kake and doop ordered again in October 2008, this time paying just under £30 including delivery for slightly more than enough food for both of us. Kake's lamb chops (£4 for a starter portion) were fine though not outstanding. Mushroom rice (£3.50) was fine, better than the lemon rice we tried last time. Prawn palak (£7) was good, with reasonably sized and not overcooked prawns.

Kake's verdict: Would happily order from here again, though not if I was feeling poor.