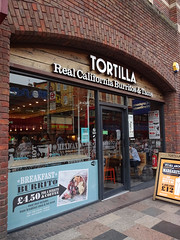 Mexican fast food place in Battersea, a couple of doors down from Clapham Junction Station.

Northern Steve and Amy visited in July 2015 and ordered nachos, two large burritos, a Negra Modelo, and a Coke which came to £23.10.

Food was considered to be of a decent standard by Amy, who being from San Diego has very high standards for Mexican food (although she considered it more Tex-Mex than real Mexican). According to Tortilla's website, they aim to make Californian-style food.