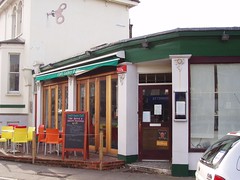 Toad's Mouth Too was a restaurant and cafe in Brockley. It closed in 2012. As of early 2013 the premises are occupied by a bar/restaurant called The Gantry.

Restaurant and cafe in Brockley.

Note: As of March 2012, Brockley Central reports that Toad's Mouth Too is temporarily closed for refurbishment, having been purchased by new owners. Brockley Central also have an interview with one of said owners. When it does reopen, it will be called The Gantry.

The comments below predate this refurbishment, and hence may be out of date.

I'll defer to the web which suggests this place is called "Toad's Mouth Too Restaurant and Gallery", though the sign outside (in the photo) calls it merely "Toad's Mouth Cafe". In either case, the whimsicality of the name and the idiosyncrasy of the rooms ensures a solid blend of local parents and ladies who lunch. The layout downstairs suggests this was someone's home once (though latterly an estate agents' office and extensively overhauled by the present owners, according to an anonymous commenter).

The place clearly gets quite busy at times, and at Sunday brunch there was a small queue waiting for tables (though the queue was moved fairly swiftly). You enter via the kitchen area, where there's a small seating area (crammed with the accumulated ephemera of years) and a till for paying.

Downstairs the rooms are bright and airy, with plenty of tables. Service is prompt and very friendly. There is a breakfast/lunch menu (with vegetarian options) and a separate wine and drinks list. The vegetarian breakfast itself on Ewan's visit was oddly comprised of both traditional fare and roast vegetables, which sat uneasily side by side. However, comments on the internet suggest this place is even better for lunch and dinner.

As of February 2008, dinner is £10 for two courses or £12 for three. Starters might include salmon mousse or globe artichokes with aioli dip; mains could include rump steak with potato wedges or mushroom lasagne; dessert choices might include chocolate torte or strawberries and cream (yes, in February...). We've not sampled this yet though.