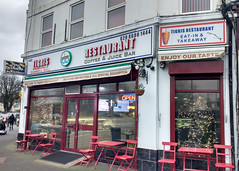 Tigris was a Middle Eastern restaurant in the Waddon area of Croydon. It has now closed. As of September 2017 the premises are occupied by a pizza restaurant called Pizza Unions (see Croydon Advertiser article).

Middle Eastern restaurant in the Waddon area of Croydon. They also do takeaway and delivery, with online ordering via Just Eat.

It opened in mid-late 2015 in a space previously occupied by a convenience store, situated alongside the busy Fiveways junction on Purley Way. Inside, it's dominated by a serving counter with a charcoal grill behind, as well as a couple of rotisserie spikes for shawarma kebabs photo. Seating is provided for about 30 people.

bob visited on a Sunday late lunchtime in December 2015. I was the only customer when I arrived a little before 2pm, though two more turned up while I was there.

A bowl of lentil soup and a small portion of cacik photo were brought to the table when I sat down, neither of which appeared on the bill. The soup was quite tasty.

I ordered a lamb shawarma (£9.45 including salad and either chips or rice) photo. The salad was fresh, and there were plenty of pickles included. The shawarma meat was nicely marinated and quite soft, which is the way I like it.

A glass of pineapple juice photo was freshly made from blended pineapple, and quite thick from the pineapple pulp included. They had a whole fridge full of fresh fruit for making juice from.

bob's verdict: I'd come back if I was in the area.

Accessibility: A ramp to get in, and another ramp down to the toilets.