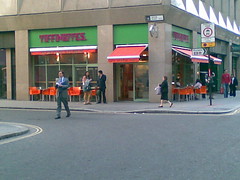 Now closed; was an Indian takeaway place by Moorgate Station. As of May 2011, the premises are being demolished photo to make room for Crossrail.

Indian takeaway place by Moorgate Station. They also do delivery, and you can order online from Urbanbite.

Your meal will come in three tubs, hot or cold, eat in or takeaway. There's a selection of combinations. Bob had the two meat/one rice combination (£9), which was very tasty. The naan are freshly made in a tandoor. The keema naan (£2.75) was underspiced in my opinion.

All the meat is halal.