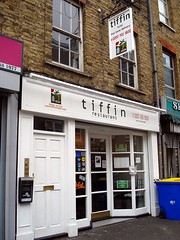 Indian restaurant in Whitechapel, just off Commercial Road. A sign in the window seen in November 2008 invited customers to bring their own booze (don't know if there's a corkage charge). They also offer takeaway and delivery; deliveries can be ordered online from Just-Eat or from their website.

Note that it's on Cannon Street Road over in the East End, not Cannon Street in the City. It also has no connection with the Tiffinbites chain.

Kake and bob tried the takeaway option in September 2008. We started with a few poppadoms (50p each) and dips (£2 for a selection of four). The poppadoms were certainly better quality than average; shame they'd mostly shattered on the way to us (they were fine on our August 2010 order). The dips/chutneys were also above-average; Kake's favourite was the very fresh-tasting (and nicely spicy) tomato one. The yoghurt-based chutney was pretty runny, and ended up mostly being eaten mixed with rice. Tandoori lamb chops (£4.30 for a starter portion of four chops) had good spicing, but one of them was rather overcooked; this problem had been rectified by the time of our November 2008 order, though.

A main dish of keski maach (£6) was advertised as "tiny freshwater fish from the Sylheti village region, slow-cooked with grated onions and orange peel" - the fish were indeed very tiny, only a centimetre or so long. Kake was underwhelmed by this dish (though I didn't try any until it had cooled down significantly - might have been better hot). A side dish of brinjal bhaji (£3.75) was refreshingly different from the oil slick you normally get when you order this in a British curryhouse - the aubergines were julienned, and it wasn't oily at all. Similar to the aubergine curries Kake cooks at home, in fact.

Kake, doop, and bob gave them another go in November 2008. The salmon samosas (£3.40 for two) were an interesting change from the usual, and pretty tasty too; maybe a little salty, but there was a nice bit of heat to them, the salmon was still quite moist, and they weren't greasy at all. Tandoori chicken (£3.75 for a starter portion of one leg) was fine; decent-sized portion, not dry, reasonable spicing. Lamb chops, as mentioned above, were good.

Moving on to mains and sides, the bathara (quail curry, £10) had good flavour, a fair quantity of on-the-bone meat, and a decent chilli kick (towards the top of Kake's chilli enjoyment range, but not beyond it). Bhindi bhaji (£3.75) was good, while tarka dal (£3.75) was competent but unexciting.

Kake ordered again in August 2010. Tandoori raj chingri (tandoori prawns; £5.75 for a starter portion) consisted of five reasonably-sized (though not huge) prawns, not overcooked, with a nice balance of spice, lemon, and salt in the marinade. Tandoori chicken leg (£4) was very flavourful. Saag aloo (£3.75) was a nice change from the usual renditions — small, new, skin-on potatoes rather than the usual stodgy cubes.