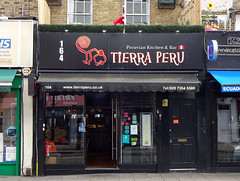 The decor is modern rather than cosy, with a hardwood floor and dark-varnished wooden tables. Colourfully striped cushions are arranged along the banquette seating. The light-coloured walls are decorated with framed photos, decoupage, painted designs, and wood carvings, and there's a bar at the far end, surmounted by a large flatscreen. It's not a large space, seating perhaps around 30 people.

We've visited twice now. When Kake, Ewan, and a friend visited on a weekday evening in February 2012 we hadn't booked, but there was no problem finding us a table. Music was playing, which along with the many shiny surfaces and the conversation of other diners, made it a little hard to hear at times.

Tamalito de pollo (chicken wrapped in a steamed corn-based dough) was OK; the chicken had decent flavour but seemed a bit overcooked, though the texture and flavour of the corn dough around it were great. Cebiche mixto (citrus-marinaded seafood) had a nice sourness and chilli heat, though the seafood was perhaps a bit more cured than Kake would have liked. Papa a la Huancaína (sliced boiled potatoes in a creamy sauce) had a very good texture to the sauce — glossy and well emulsified.

Parihuela (fish and seafood soup) had a very good flavour to the broth, and the fish was cooked perfectly (it's just a shame they hadn't removed the membrane from the squid). The mound of citrus-marinaded onion in the centre of the bowl was a great contrast.

Arroz chaufa de mariscos (fried rice with seafood), a Chinese-Peruvian dish, was fine, and not too oily. Yuca frita (fried cassava) had a great texture and wasn't greasy at all.

Lomo saltado de carne (beef strips stirfried with red peppers, vinegar, and soy sauce) had a nicely tangy sauce which soaked in beautifully to the fried potato chips served underneath, and also went well with the plain white rice served on the side. The beef could perhaps have been trimmed a little better, as there were some overly chewy bits.

Service was a bit slow, both in terms of taking orders and in bringing our food/drinks, but they did have a moderately-sized party in, which may have affected things. Also, the staff were friendly, and although the menu is really set up for people to order individually, they were happy for us to share our starters and mains, and brought extra plates to help with this without being asked. Our final bill including service was £35/head for slightly more food than we could eat plus a cocktail and glass of wine each.

On our second visit, on a Tuesday afternoon in August 2019, Kake was alone so just had a starter portion of ceviche tradicional (£10) photo. It was a generous size — I'd have said enough for a main, if you added a side to it — and nicely zingy, with plenty of lime and enough chilli to add a gently warming heat. There was a little connective tissue left in the fish, but not enough to make much difference. It was served with a few large, starchy corn kernels, two thick slices of well-softened sweet potato, and a single perfect curl of crisp, greaseless fried plantain.

Kake's verdict: I'd like to learn more about Peruvian food, and I would happily come back and do that here.

Accessibility: A step to get in, and another small step to the men's toilet (none to the ladies').