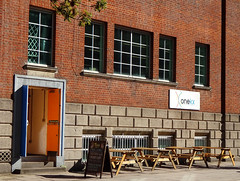 Vegan "spice-inspired" cafe in Bloomsbury. It was previously vegetarian, but is now totally vegan.

It's a surprisingly light and bright space, with a high ceiling, white-painted walls, wood-effect floor, and large windows high up on the wall. One barely even notices the large-bore ducting stretching up along one wall to run along the centre of the ceiling. Colour is added by art prints hanging on the walls and bits of sculpture here and there. It seats around 45 on basic wooden chairs at scuffed wooden tables, plus another four or five on a couple of sofas.

The service counter is to one side, in front of an open kitchen. They'll take your order here, point you at the cutlery, napkins, glasses, and water jugs behind you, then bring your food to your table once it's been dished out.

The menu is limited, with a set meal each day plus a few add-ons for the extra-hungry, such as samosas and mini dosas (without chutneys). They also do cakes and juices.

Kake visited on a Tuesday lunchtime in October 2018. It was about half full when I arrived a little after 1pm, but emptied out while I was there, and by 2pm there were only four of us left. '90s music was playing on the radio (Magic Radio), not too loud. Service was welcoming, friendly, and helpful.

The set meal of the day (£6) photo consisted of chana dal, rice, mixed vegetable curry, and a savoury rice flour biscuit. The dal was on the edge of undercooked for my taste, though not quite there; it was also a little bland, and could have done with more spice, salt, or something. The vegetables were nicely varied, but again I wished for a bit more spice to them. The rice and biscuit were fine.

Masala tea (£2.50) was better spiced, and came unsweetened, though could perhaps have been creamier; it was made with coconut milk, which gave it a good flavour but also made it a little thin.

Accessibility: Two steps without handrail followed by half a dozen with handrail to get in. No further steps to toilets.