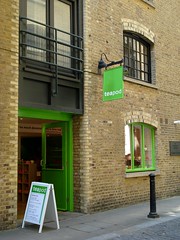 Teapod was a modern-style teashop on Shad Thames, near Tower Bridge. It has now closed. As of April 2019 the premises are occupied by a branch of the Watch House coffee shop chain photo.

The decor is pale wood, with a nice colourful display of the teapots and tea on sale (all their tea is available to buy for brewing at home). There are about nine two-person tables, some of them pushed together to cater for larger groups, and there's counter-style seating on high stools for four or five more people.

Order and pay at the counter, and they will bring your food/drinks to your table. When your tea arrives, they'll tell you how much longer it needs to be brewed for; there's a clock on the wall calibrated in minutes photo to help you time the brewing of your tea.

They do food as well as tea, with both sweet and savoury items including a full afternoon tea (£11 as of June 2010), bagels, soups, baked potatoes, porridge, and various cakes.

Kake first visited around noon on a Wednesday in May 2008. There were a couple of other customers but I had plenty of choice for where to sit. There was background music playing (Red Hot Chili Peppers among other things) but not too loud. Service was friendly and helpful. I had a pot of silver needle tea (£2.95 for a small pot), and I also got some to take away; £4.25 for 25g (you get quite a lot for 25g so this is a decent price).

Kake visited again on a Friday afternoon in June 2010. There were seven other customers this time, so again plenty of spare seating. I had the "Devon cream tea" (£5), which gets you a scone with jam and cream photo plus a small pot of tea of your choice. I chose their "classic China green tea", which turned out to be chun mee (珍眉/zhēn méi). The pot was more than enough to have with the scone, so I didn't ask for a rebrewing. The scone was fine and quite large, and the jam was nice and chunky.

A sign seen in June 2010 said they offer free wifi.

Accessibility: No step to get in (just a small ridge), and it's step-free through to the toilet too. The interior is quite well-filled with chairs and tables, and it might be hard to get a wheelchair to a table if the place was full. The toilet is a single cubicle and isn't overly large, but the door opens outwards, which helps a lot with getting in and out.