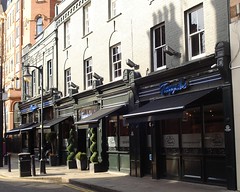 An excellent and good value restaurant serving Pakistani food in Whitechapel. It is also occasionally referred to as "New Tayyabs", and over the years has expanded from its original premises to take in an adjoining building, once a pub. They offer takeaway and delivery; for delivery, you can order online via Dine-In.com.

Like many of the curry houses in this vicinity (and popular opinion tends to focus on the Bangladeshi places on nearby Brick Lane), Tayyabs is very popular and almost always very busy. Unlike the Brick Lane curry houses, however, Tayyabs inspires a degree of cultish fandom and as such is a London institution, serving good quality, freshly-prepared curries quickly and cheaply for large groups of hungry people.

A Saturday lunchtime in December wasn't too crowded, but of an evening, queues can often be seen snaking around the whole restaurant. According to Chris of Cheese And Biscuits (blog review linked below, but he told Kake this in person), the only way to get in without queueing in the evening is to arrive before 6pm. You can make advanced bookings, including for their 'VIP Room' (a separate room with space for a couple of medium-sized groups, and a TV screen showing pop videos), both by phone and on the website (which worked fine on one of Ewan's visits).

Ewan's visit in December 2008 was with a group of 15 including a baby, and they had no problem accommodating us during the day. Right away, plates of salad were placed down and drinks orders taken — several jugs of mango lassi, and tap water, all arrived soon after, accompanied by perfect, crunchy poppadoms.

When food orders were taken the friendly and personable waiter suggested just bringing a selection of mixed grill meat as starter, with some fish for those wanting that, and a paneer dish for myself (the lone vegetarian) photo. This all arrived sizzling and hot straight from the oven photo, and was generally appraised as being of very good quality. Our curry mains arrived after, preceded by piles of mixed naan breads, not at all stodgy, and beautifully cooked. Curries were not too oily and most came in hot metal bowls to keep them warm.

Kake can recommend the lamb chops, on the strength of an August 2008 visit — the best I've ever had, and I do not say this lightly. They were my canonical lamb chops; lots of crispy fat, good flavour, and not too tough, chewy, or dry. Note however that a couple of the reviews linked below imply that as of March 2009 the lamb chops may not be as good as they used to be.

There is no alcohol available from the restaurant, but they let you bring your own. The restaurant closes during the month of Ramadan, when they only offer a takeaway service. There is also a counter selling all kinds of sweets and kulfi.

Ewan's verdict: I've visited several times now and never had a bad experience, though the crowds mean that tables get rather packed in and the place can seem frenetic when busy.

Kat's verdict: The highlight is definitely the starters, the masala fish in particular is divine - spicy, good-sized chunks of fresh fish. Waistband-expandingly moreish.