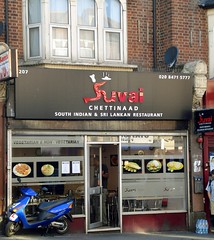 Suvai Chettinaad was a South Indian cafe on the High Street in East Ham. According to Google Street View, it closed down by June 2014.

South Indian cafe on the High Street in East Ham. Note that the spelling of the name isn't entirely consistent; the main frontage says "Suvai Chettinaad" but smaller writing on the window has "Suvai Chettinad".

Inside, the decor is cafe-style, with pale-painted walls, shiny floor tiles, and a full-length part-frosted window frontage. The tables are pale wood and the chairs are shiny tubular metal. It could probably seat about 40 people.

The menu is focused on South Indian food, and includes various tiffin items (e.g. idli) as well as light meals (e.g. dosas) and thalis. Like the other cafes along this part of the High Street, it's all very cheaply priced.

Kake visited on a Monday early evening in July 2009. There were a few other customers in, but it stayed fairly empty during my visit; this may have been due to the weather or the early hour. Music was playing quietly. Service was welcoming enough. As is usual for the East Ham cafes, tap water is provided in lidded metal jugs sitting out on all the tables; it tasted rather fresher here than at the other places I've tried so far in the area.

I went for the veg thali (£3.50), which included six curries plus rice, poppadom, and plain yoghurt. The rice was fine (and plentiful), and the poppadom was fresh and crisp. The curries were quite well-varied, with distinct flavours. Overall, the heat level was just about right for me, but would probably have challenged someone who isn't used to eating this sort of food.

I liked some of the curries better than others. The dal had a fair bit of heat, but it wasn't over the top. Another soupier dish turned out to include chana dal, cooked al dente so they retained their shape. A tomato curry was fairly mild in comparison to the other dishes. I wasn't overly keen on the rasam (thin soup), which was quite oily yet fairly flavourless despite all the herbs in it. A tangy (tamarind-based?) curry with visible black onion seeds was better; I'm not sure what vegetables were in it other than aubergine. The final dish was a dry and slightly oily curry containing slices of a finger-thick gourd-type vegetable that I didn't recognise.

I found the normal veg thali to be more than enough food, but they also have a "special veg meal" available for about a pound or so more, which includes unlimited refills of rice and curry. Normal and special non-veg thalis are also available, or you can order a la carte.

Accessibility: One step up to get in. To get to the toilet, you need to go up three more steps, then down a winding staircase with a handrail on one side. (The loo itself was a bit dire; single unisex cubicle with pee on the seat, a broken flush, and no soap.)